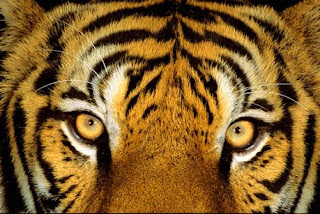 :-) I love that.. Tigers are so amazingly beautiful, aren't they? I don't know that I could imagine something so perfect as a Tiger in my wildest dreams.

The tiger is the Divine Mother's favorite animal, of course!

The President of the United States

On one level, I'm what you might call a "pre-conciliar Christian Buddhist". That is, within the first three-hundred years or so after the ascension of Christ, the Christian tradition existed without a council defining what Christians had to believe in order to be Christian. One can take the dual commandments of Jesus (Mark 12:28-34) as defining what it means to be Christian:

Since God is Truth, and Truth is One, we can summarize these dual commandments as "Love Truth, and love self and others equally". One may, then, love Truth and love self and others equally whether one adheres to any number of religious-philosophical frameworks. I am formally associated with a Baptist lineage, Christianity forms my cultural heritage and environment, and my Christianity finds inspiration from this ancient, and yet always new, pre-council, or pre-conciliar, era. I am also formally associated with Buddhism, and Buddhism forms a basis of my psychology and cosmology. And by "Buddhism" I include the larger Dharmic Tradition underlying the Indic traditions as well as the Abrahamic traditions. I understand Jesus the Christ within this Dharmic context, as a Buddha, or a Bodhisattva, or an Avatar. In this sense, I am "Christic", rather than orthodoxly "Christian". Yet, I accept the label "Christian", or even "Catholic".

On any given Sunday, I may attend church, usually either Baptist or Catholic. One could say -- following the Nicene Creed -- that I am of the One, Holy, Catholic, and Apostolic Church, even if many of my doctrinal positions do not exist within orthodox Christianity. Fully practiced and lived, Christianity -- whether heterodox or orthodox -- can serve as a field of salvific liberation just as efficiently as any other tradition. Indeed, the challenge and destiny of Christianity is to form, transform, embody, and transmit the teachings of Christ, the Buddha of the West, also known as Yeshua the Nazarene, whose heritage may be temporally traced both through the Vedic, Zarathustrian, Abrahamic, Judaic, Orthodox, Catholic, Anglican, and Baptist lineages; and the Sramanic, Jain, Theravada, Mahayana, and Vajrayana lineages.

To affirm Jesus as Lord, is to affirm the Buddha as Bhagavan. Indeed, "I am the Way, the Truth, and the Life" -- the Dharma, the Satya, and the Ayur. Granted, most of my fellow Christians would not agree with such an equation of affirmation. That's fine. The Christian tradition, or even any one particuar Christian church or parish, can contain many diverse perspectives. I have no need to convert others to my ideals, or to undermine the Christian ideals of others.

If someone non-Christians asks, "Do you really believe in x, y, and z", where "x, y, and z" include Christian doctrines and dogmas apparently insulting to reason; the only appropriate question is to ask "What do you mean by 'x, y, and z'?" From a Catholic perspective, take the example of papal infallibility. Who defines "papal", or "infallibility"? In within what linguistic, social, and historical context does "papal infallibility" exist? Analyzing further, one finds that "papal infallibility" is made up of non-"papal infallibility" elements: thus, "papal infallibility" is not self-existing, or eternally true in and of itself; rather, it is a product of various impermanent elements linguistic, social, and historical. As such "papal infallibility" may be a useful idea, within a particular linguistic, social, and historical context, but it is not absolute truth. No dogma or doctrine would be absolute truth. There is no reason to take any dogma or doctrine absolutely seriously, as if taking God absolutely seriously were not enough! It is this understanding of "only-God-is-absolute" that is the contextual matrix within which a true Christian must understand his or her tradition's dogmas, doctrines, and teachings. Many Protestants misunderstand the biblical scriptures, reading them through the lens of sola scriptura. Catholics do a bit better, arguing correctly that scripture is simply one aspect of a larger Tradition. However, both scripture itself, and the larger Tradition, are organic growths out of solus Deus, "God-Alone", or Christian Non-Dualism. The only thing I believe in, is God (Love, Light, Logic, and Life); everything else is debatable.

However, to simply argue for the non-ultimacy of any particular dogma and doctrine is too easy a way out, especially if the one arguing has not him/herself realized non-duality. In such a case, Christian dogmas and doctrines that insult logic can be best understood as symptoms of the ultimate poverty of logic itself, when it is divorced from the Heart.

I heart-embrace all religions, because all religions share a common, socio-cultural genetic code symbolized by the Heart, the Beloved, the Buddha, and Jivanta. I consider myself equally Baptist, Catholic, Jewish, Muslim, Buddhist, Hindu, Jain, Sikh, Taoist, Confucian, to mention a few; because they all diversified from the same basic realization, revelation, realizer, and embodiment. "Religion", though, is different from "religious philosophy". Any one religious philosophy (or any one conceptual system of perspective-cosmic) cannot totally reflect reality. Yet, religion -- the totality of life lived in wisdom and understanding, as expressed in various human-cultural manifestations -- serves as a powerfully agapic-karunan diaphany of very reality. There is nothing that anyone has verbally or mentally conceptualized, that is totally and permanently true, but truth can be pointed to, directly or indirectly, and, most importantly, truth can be lived.

The practice and worldview to which I adhere collectively may be called Jivanta, the fulfillment of Life; Christic Advaita, Christian non-duality; Christic Siddhanta, the Christian way of completion; Christanta, the fulfillment of Christianity; Avatar Jesus Buddha Catholicism; Indu Christic, the Christ-consciousness as understood within a Buddhist framework; Hridaya-Yoga, the Way of the Heart; or Bio-Energetic Depth-Transcendence, the essence (Depth, Heart) and culmination (Transcendence, Beloved) of self-awareness (the communion-union of Life-Energy, Buddha-Jivanta). If all of that is too complicated, just call it Scientific-Tantra, the open-ended analytical inquiry of Unbroken Wholeness.

Christ's dual-mitzvot to love God and to love self and others equally, can be translated, into Jivantic terms. To love Truth is to love deeply from, in, and as the Heart; and to love expansively from, in, and as the Beloved. To love self and others equally (and, thus, all living beings, whether animate or non-animate) is to love the energy/matter cosmos of Jivanta; and to love the Buddhas, or centers of actualized or potential awareness. To practice Jivanta is to practice the Heart of all religions, to fufill them in their very essence. To practice Jivanta is to practice the way of the Buddhas, to commune with the Christ, to praise Ahura Mazda, to usher in the Messianic Era, to emulate the Conquerors, to utter the Name of Truth, to pray towards the Holy City, and to install the Bright Guru, the Great Ahamasmi. Different religions and spiritualities are different experimental laboratories for pointing toward truth, different existential adventures into nature and deeper-than-nature; and all of them can offer novelty and sacrifice, and all of them can (and will) be transformed.

Essentially, I am neither merely Christian nor merely Buddhist nor merely both nor merely neither. I practice the Spiritual Science of observation-awareness, problem-recognition, hypothesis-formulation, and solution-testing; this is the genetic code, the tantric-method, the theo-algorithm, the Spiritual Science, by which all religions and spiritualities function. Both my Buddhism and my pre-conciliar Christianity are Spiritual Sciences to which I have concrete, formal connections. I also have equally deep, but non-concrete, non-formal connections to Hinduism and Islam, and am equally Hindu and Muslim. Hinduism represents the Heart; Christianity, the Beloved; Buddhism, the Buddha; and Islam, Jivanta. Though Hinduism represents the Heart, Hinduism is not to be equated to the Heart. The Heart is the source of Hinduism, Christianity, Buddhism, and Islam; and the realizers associated with these religious traditions all realized the Heart and communicated that realization in diverse ways, ways dependent upon their physical, emotional, intellectual, cultural, and social contexts. Any differences among these religious traditions are differences of non-ultimate import; and if there seem to be differences of ultimate import, then know that those differences have been mis-interpreted, mis-applied, or mis-understood. These four faiths together thus symbolize the entirety of humanity's spiritual adventure; they serve as gate-ways to the larger vistas of the almost infinitely creative fields of human religion and bio-spirituality; and this diversity, and reality itself, arises out of the most basic, and highest, Dharma, the Scientific-Tantric matrix, the always-already intimate, always-new and ever-ancient, Tantric-Eucharistic communion-union, satsang-yoga, of rejection and acceptance, skepticism and trust, compassion and wisdom, yang and yin, Adam and Eve, Christ and the Church, Sun and Moon, Shiva and Shakti, Jina and Jiva, Krishna and Radha, the Creator and the UnCreated, the Beloved and the Heart, originally, continually, and finally realized in every single form.